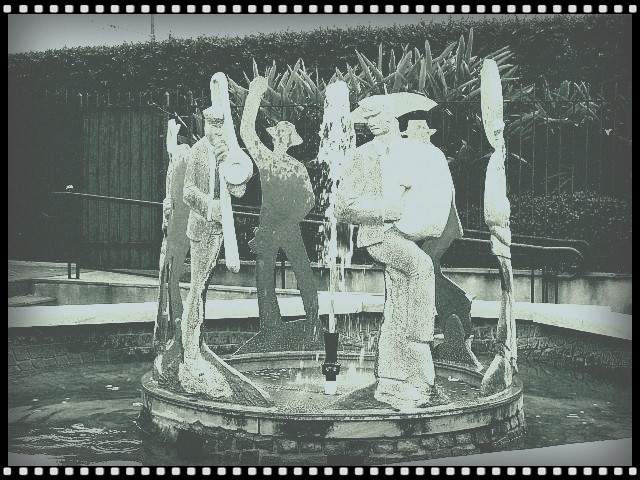 A little while ago, while listening to a Jazz concert, I found myself quite happy to see that there were many children around.

As the concert advanced, one little boy, about 4 years old, started to dance following the enjoyable notes that came from the instruments played by the musicians on the stage. At some point the little kid lost his balance and found some support on my chair.

I smiled at him and helped him to regain his balance and cheered him up to continue dancing, as his dad looked happy I was encouraging his little son.

This experience made me realize how important it’s for new generations not only to get to know the Jazz and Big Bands classics from the Golden Age, but also to enjoy them.

Wondering what else it could be done to share with little children the love for Jazz, apart from taking them to live concerts and playing jazz music to them, I came across with a wonderful book called Who was Louis Armstrong?, by Yona Zeldis McDonough, and illustrated by John O’Brien.

The edition, designed to be read by children, tells the story of Louis Armstrong, since he was a little boy growing up in New Orleans, from the time he sold newspapers in the streets to help his family out, until the time he found his first cornet in a pawn shop.

Presented with lots of illustrations and a big nice font, the story continues up to the times when Armstrong played in Chicago and New York, along with the good and the bad times.

The books also includes fun materials that talk about the history and development of Jazz in the United States, the interaction between Steamboats and Jazz, the several influences that have become part of this music as well as the main instruments that form part of it, and some popular terms.

Happy with my book, I got even happier when I learned, some time later, that Chris Raschka, writer and illustrator, has also designed and published some children’s books with which he inspires very young readers to get to know the life and work of jazz musicians with titles such as Charlie Parker played Be Bop, Mysterious Thelonious, John Coltrane’s Giant Steps, and The Cosmobiography of Sun Ra.

Some other children’s books that talk about jazz musicians are Duke Ellington: The Piano Prince and His Orchestra and Ella Fitzgerald: The Tale of a Vocal Virtuosa by Andrea Davis Pinkney.

With this, my hopes are that more are more kids will grow up learning about Jazz and ejoying its joyful melodies, which hopefully will bring happines to their lives and to all of those who will happen to be around. And who knows, may be, in the future, these young readers might become the next Jazz starts!