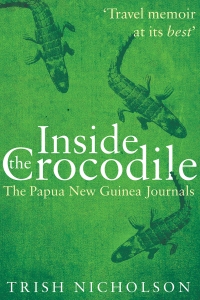 Much more than just a memoir or a travel journal, Inside the Crocodile is a wonderful read. From the very first page, Trish Nicholson catches the readers’ attention, taking them into a delightful journey.

The pages pass fast as curiosity increases. And this is because the author has shared her experiences while living and working in Papua New Guinea – which celerates its 40th Independence Anniversary this September 16th- with genuine openness, talking the same about the good and the bad or difficult days, in this country that became her home for five years, while implementing a development project with World Bank funding.

The differences between her homeland, Scotland, and her new place, an island in the Pacific Ocean, were very big, but Trish arrived there with an open mind and the wish “to understand other ways of life.”

She was aware that she should have to accept “discomfort and uncertainty,” and she sure did it. As her time in the island passed by, she endured several episodes of sickness and incertitude. But she faced all those challenges with strong determination and the conviction that when the rest of the people believe that “yes usually meant probably not”, for her, it only meant that she just had to find another way.

Inspirational at all time, the book is also full of humorous anecdotes that occured to her either while trying to make her new office and house work with the things she had at hand or that some colleagues lend her, or while travelling around the country.

The rhythm of the story goes easy, creating vivid images of a country that has more than 800 hundred indigenous languages; a population composed by more than 7 million people, and which has managed to keep its own culture and traditions despite modernity, bureaucracy troubles, foreign influences, and globalization.

For most travellers, this island remains a mystery, or it’s seen as an exotic destination. And this is one of the wonders of The Papua New Guinea Journals, because it describes the country from the eyes of a visitor who took the time to get to know the people who live there, their problems, worries, traditions, hopes and dreams. And it’s also this truly humane side of the story told by Trish, that makes this book a remarkable moving story and that is able to open the readers’ eyes, minds and hearts, so that they can see the island and its inhabitants as a country worth knowing, and not just as another place to visit, or a short stop on their way to their next destination on a tour.

Trish completed more than 600 pages with her experiences while living in the island. From those memories, preserved in paper, she wrote her travelogue in a very dynamic way. Lively exclusive photos, that only can be seen in her book, give the readers a unique opportunity of seing with their eyes what they’ve already pictured in their heads, while reading Inside the Crocodile.

Travellers, antropologists, sociologist, aid and development workers, and of course book lovers will find in this book a refreashing and very pleasant source of inspiration.

* All photos courtesy of Trish Nicholson

2 thoughts on “A complete delight: “Inside the Crocodile – The Papua New Guinea Journals””