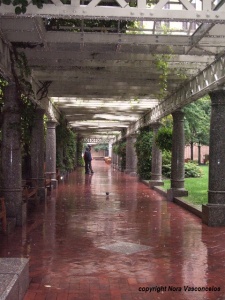 From The Time Machine, first published by H.G Wells in 1895, to The End of Eternity, by Isaac Asimov (1955), Time Traveling has been a subject that has fascinated writers for years and years.

In some cases, the main character has some sort of control regarding the places he or she wants to visit, in some others, it’s totally at random.

In The Accidental Time Machine, by Joe Haldeman, as the title says, the adventures of Matt Fuller started after an experiment he was doing at a lab in Boston began to act funny.

One night, while taking a devise home, he discovers that it has “moved” a short distance from the original place he had left it, after he has manipulated this particular box. Working some equations, he thinks that what he has in his hands is some sort of time machine, so he decides to see how it works.

As it’s a small device, he places a small turtle, with all its habitat (food and water), onto the box, and with the help of a camera, he records what is the first time travel for such a little pet.

As time passes by, Matt realizes that the machine travels are exponential, so with some practice and a lot of equations, he’s able to determine up to what moment in time the machine will travel, however, up to this point, it remains unknown for him where the box goes.

As his experiments continue, and his life turns completely around them, Matt discovers that if he joins the machine with a car, using a wire, he’s able to travel through time as well.

This is when the real adventure starts for him. As he’s able to know for how long he’ll be away, he can prepare some supplies, however, he’s never certain where he will end up, so he has to prepare a bit of everything, “just in case”.

Accidents happen every time he uses the machine, and more people are affected, in positive or negative ways, when he arrives to different eras and places. But somehow, he manages to return to his hometown in Boston, many many years later from the time he started traveling.

Then he has to learn all about this new life, in which he ignores many customs and appears as an expert in some other fields. Currencies are different, although people always speaks his language, with some variations, and clothes vary a lot.

With every adventure, he has to learn how to trust people, and how to let them go as well, but problems always remain in the past, as any time things go sour, he just clicks a little button and there he goes, traveling through time again.

At the end, what might have seemed an ideal situation, turns into something unexpected, what allows Matt, finally, to find some stability and happiness, with a life that little resembles that one that he left behind that uneventful night when accidentally he discovered his time machine.