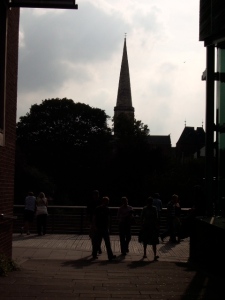 I recently read The Metamorphosis by Franz Kafka and ever since I finished it I have been thinking about it over and over. The story begins when Gregor wakes up and discovers that he’s being transformed into an insect, which I’ve pictured in my head as a huge cockroach. While he’s still trying to understand what has happened to him and is trying to see how he can move around with his new body, his family come along to see why he hasn’t gone to work. After a little while he manages to open the door and they can’t believe what has happened to him.
As time passed by, the family go from repulsion to apparent acceptance. But as Gregor starts getting used to his new reality he tries to bother his familly as little as possible, because he realizes that for them it’s a disgusting situation.
The most amazing thing is that during all this time, despite his instect-body, Gregor keeps his own personality and his human mind. That made me think that he must have felt himself as a foreigner within his own body. That’s really sad!

2 thoughts on “A foreigner within his own body”